The Google Pixel 7 Pro is the latest flagship smartphone from Google. It comes with an all-new design, high-end hardware, and a camera setup that’s sure to impress. In this review, we’ll look at what makes the Google Pixel 7 Pro tick and how it stacks up against other devices on the market today.

In the year’s second half, Google’s Pixel family has come to be anticipated, much like a new release from Samsung or Apple. A new Pixel is coming once the leaves change and the weather starts to cool off. The Google Pixel 7 Pro is one of Google’s newest products for this year.

If you’re replacing a Pixel 5 or an earlier model. If you’re in that situation, this phone will seem like a new tool and camera. You can avoid this if you have a Pixel 6 and don’t need the extra features.

The Google Pixel 7 Pro is Google’s top phone, its chief mobile device, a gateway to an entire ecosystem of Google-connected hardware and services that work together across platforms. It’s what ties everything together.

The Google Pixel 7 Pro’s design is not significantly different from the Pixel 6 Pro’s. The large horizontal camera bar on the back panel is still present; however, polished aluminum has replaced the original camera bar’s glass surface. Three colors are available for the Google Pixel 7 Pro from Google. You can select between Snow, Obsidian, or Hazel (all three are grey) (and white). The Snow test unit that we received is a lovely shade of white.

With the Pixel 6 series, Google debuted a daring new design language last year, ushering in two-tone colors and the now-iconic camera bar. It transformed the Pixel from uninteresting to fascinating, and it was a risk that paid off handsomely. Thankfully, the Google Pixel 7 Pro builds on the strong foundation that the Pixel 6 Pro established while also making some improvements to make it even better.

The phone’s sides are rounded by a power button, a volume rocker, a SIM card slot (Google, unlike Apple, still supports both physical and eSIM cards), a USB-C connector, and a speaker on the bottom.

Google offers Corning Gorilla Glass Victus on the front and back and an IP68 grade for protection against dust and water. We would anticipate these characteristics from a phone in this price bracket, but it would still be wise to protect it with a case.

Google provides two biometric unlocking methods: You can use your face or a finger. The former utilizes an accurate in-display fingerprint scanner that we discovered during testing. Never once did the phone requires more than one finger scan to unlock.

Most of the time, the face recognition feature worked, but occasionally it would refuse an entry because of unkempt hair, forcing us to either try again or enter a PIN.

When many phones only support one or the other, it’s convenient to have both alternatives available. Apple’s Face ID is more reliable, especially when your face varies due to spectacles, hats, hair, etc.

Although the “stock” Android UI on Pixels is fantastic, the real brilliance of a Pixel rests in the many AI capabilities made possible by Google’s Tensor processor. All of these features from the Pixel 6 Pro are back in the Google Pixel 7 Pro. Do you want to get rid of people or things in your images that you don’t want? With only a few touches, Magic Eraser enables you to achieve this.

Are you waiting on hold for a customer service representative to contact you? Allow the Google Assistant to hold your place in line. These little, practical features give the Google Pixel experience its enchantment and are perhaps the Pixel series’ strongest suit in 2022.

The main modifications originate in Google’s software computation, which has always supported its image output. In real-world terms, the Tensor G2 renders and processes pictures more quickly. For example, Night Sight completes the same task in half the time, and the wide and ultra-wide lenses may be combined to sharpen focus on faces. It also impacts more recent features like Google Photos’ Photo Unblur.

The great function was announced a year ago and has since been added to the Pixel 6a, and some other Android phones can be found next to Magic Eraser in the Tools section.

In the field, you can still rapidly start the camera by double-clicking the power button, and the camera app’s flip gesture alternates between the front and back cameras. If you need to turn off the camera for whatever reason, Google has included a simple setting in the notifications pane for enhanced protection.

The Google Pixel 7 Pro adds several new features to all of last year’s Pixel goodness. Photo Unblur is among the standout upgrades. A new “Unblur” button has been added to Google Photos, which you can use to retrospectively eliminate Blur and noise from any image you want to edit. The functionality appears to be extremely good in Google’s samples, but it hasn’t been that great in actual use.

One of my favorite features of the Pixel 6 Pro was its display, and the Google Pixel 7 Pro doesn’t disappoint either. I enjoy watching this screen for playing games, watching movies, etc., because of the vibrant colors, clear writing, and excellent viewing angles. During my use of the Google Pixel 7 Pro, the 120Hz refresh rate has also been fantastic, making everything feel as smooth as possible.

A 6.7-inch OLED screen dominates the Google Pixel 7 Pro’s front. It has a 3120 x 1440 resolution, a refresh rate of 120 Hz, and a maximum brightness of 1,500 nits (just shy of the 2,000 nits offered on the iPhone 14 Pro). Corning Gorilla Glass Victus covers it, providing excellent protection from scratches and cracks.

The battery of the Google Pixel 7 Pro is 5,000mAh. The Google Pixel 7 Pro’s battery drains faster despite being 13% bigger than the 4,355 power cell in the Pixel 7. This is probably because of the faster, higher-resolution display, which takes more processing power.

The Google Pixel 7 Pro lasted for 10 and 50 minutes on our battery drain test, which involves streaming a YouTube movie at full brightness over Wi-Fi until the device shuts down. The Pixel 7 lasted 12 hours and 10 minutes, in contrast to the Galaxy S2210 +’s hours and 30 minutes. With 19 hours of battery life, the iPhone 14 Pro Max decimates the opposition.

The Google Pixel 7 Pro doesn’t include a charger in the box, even though it supports 30W fast charging. In comparison to certain flagship smartphones, you’ll receive a full charge in 1 hour and 51 minutes, which is sluggish. If you want wireless charging, Qi chargers can provide up to 15W power.

Battery Share enables you to charge additional devices, like the new Pixel Watch or a set of headphones, using the power stored in your Google Pixel 7 Pro.

Long-standing rumors claimed the Pixel 6 Pro would have face unlock, but it was just a pipe dream. Face unlock returns to Pixel phones with the Google Pixel 7 Pro, and although it’s fantastic, it’s not exactly how you remember it from the Pixel 4.

The Google Pixel 7 Pro’s face unlocks function is identical to that of a OnePlus or Samsung phone. It makes it simple to get past the lock screen, but that’s all. It would help if you utilized the on-screen fingerprint sensor on the Google Pixel 7 Pro to open a locked app, authorize a Google Pay transaction, or do anything else.

It doesn’t seem like anything has changed with the fingerprint sensor. There are occasions when it successfully recognizes my fingerprint the first time. Even though I’d want things to happen faster, it frequently takes a beat longer. It frequently takes me two or three tries until it successfully scans my finger when it doesn’t function. It’s not a deal-breaker, but it’s also not all that fantastic either.

Cinematic Blur, which is exactly how Google has adapted Apple’s Cinematic Mode, is the major update on the video side. You may change the bokeh effect on the video at any time by adjusting the focus. It has a less polished appearance than Apple’s, but it is a clue that Pixel phones might have strong video cameras. Another improvement that should benefit video recordings right now is autofocus, which is now quicker and simpler to lock onto a target.

The option to film in slow motion or time-lapse, as well as the other existing video modes and related tools, are still available. If you have a place to edit or play it back, you may shoot in 10-bit HDR. You also have the choice to record audio using a Bluetooth microphone. That is fairly successful if you use your phone for vlogging and have a microphone connected.

At 0.5x magnification, the 12MP ultrawide camera produces good images with relatively minor edge distortion. The primary 1x 50MP camera is outstanding. With photos that are 12.5MP, it captures a tonne of the information under various lighting settings. This year, the option to “expand” to 2x optical magnification utilizing only the sensor’s center pixels is new. It works surprisingly well, matching the results you would generally get with 2x optical zoom on competitors. Apple employed a comparable strategy for the iPhone 14 Pro.

Thanks to improved software algorithms and better-tuned camera calibration, there are several enhancements over the Google Pixel 6 Pro, including zoom and video. For instance, the camera now has a fusion technique that enhances texture rendering while utilizing the telezoom—something we have seen on numerous competitors in the Ultra-Premium market. To provide the greatest possible image quality at any telezoom level, the system integrates the image data from the primary and tele cameras.

Additionally, a macro setting that takes advantage of the ultra-wide camera enables attractive close-up images under various circumstances. As you approach a topic, the gadget automatically enters macro mode. However, the app’s user interface allows you to disable this feature quickly.

The Google Pixel 7 Pro has powerful hardware and camera setup to take on the competition. It has 240fps slow-motion capture and 4K video recording at 30 and 60 frames per second. Similar to Action mode on recent iPhone models, the Cinematic Blur and Cinematic Pan capabilities enable you to produce videos that are more like movies.

What is the difference between the Google Pixel 7 and 7 Pro?

The display size is the most visible distinction between the Pixel 7 and Google Pixel 7 Pro. The 7 has a 6.3″ OLED panel, while the 7 Pro extends to a 6.7″ screen that resembles the iPhone Pro Max (again, with OLED technology). A variable refresh rate that can go up to 120Hz is another advantage of the 7 Pro.

This is a lot quicker than some phones’ cable charging speeds. Since the 2018 Pixel 3 series, Google has included wireless charging on its smartphones (all save the Pixel A series). No different. The Pixel 7 and Google Pixel 7 Pro both offer wireless charging support.

Does the Google Pixel 7 Pro have a fingerprint sensor?

It’s a well-built phone with a fantastic screen, smooth operation, and respectable battery life. As with the quick but less secure facial recognition for phone unlocking, the quicker fingerprint scanner is a good addition.

Does the Google Pixel 7 Pro have a curved screen?

Even if the curvature may be better, it is still not flat enough for screen protection. Avoid the Google Pixel 7 Pro if a curved screen is a deal-breaker for you. Fortunately, you don’t have to completely ignore Google’s newest line because the Pixel 7 has a flat screen you can use. 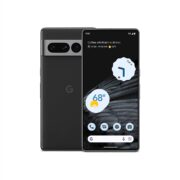