Webb Space Telescope photos of Neptune are the closest ones and are currently trending on social media. It is the first time Neptune has been captured so close alongside its rings, and 7 out of 14 moons are also visible. 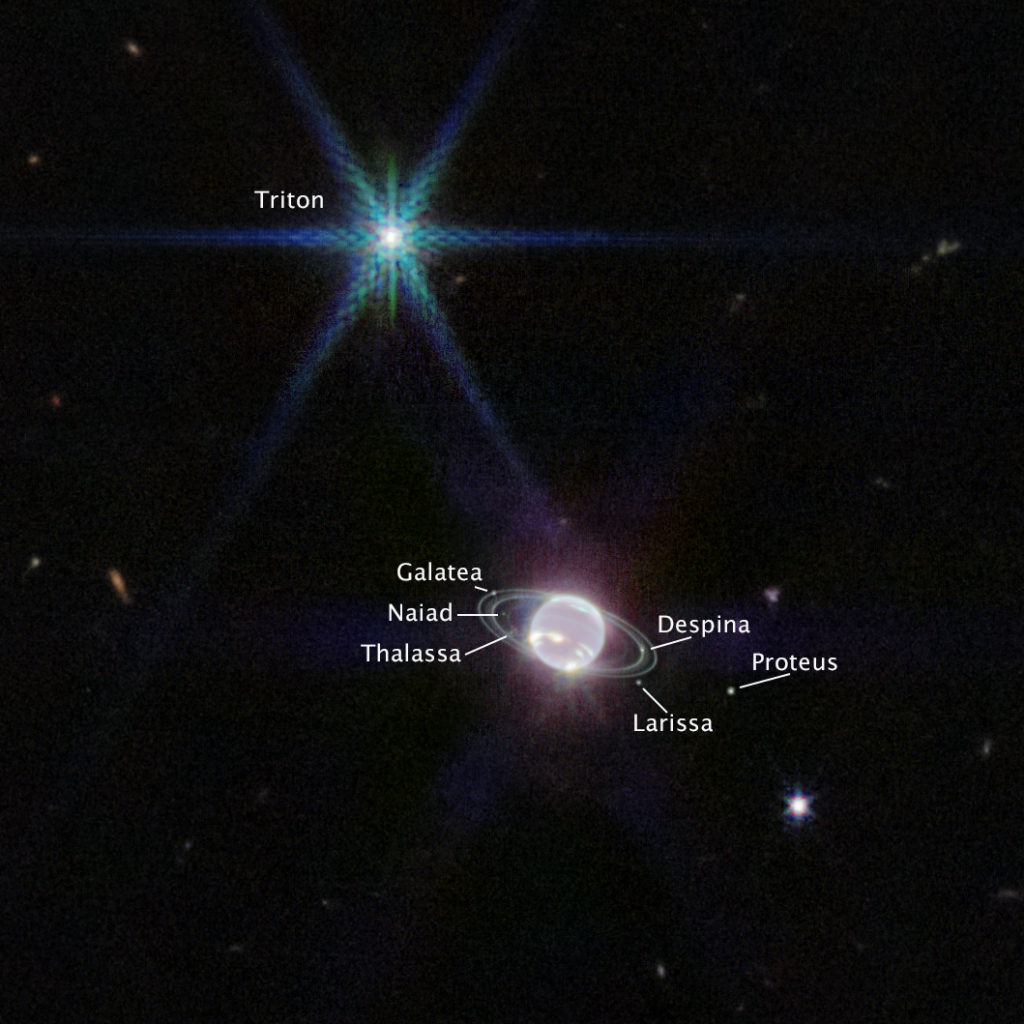 The James Webb Space Telescope viewed this distant planet on Wednesday with its mighty, gold-plated eye. Some of our best views of this planet in the past 30 years have been made possible by the power of this infrared telescope and the biggest and most sophisticated telescope ever sent into space.

“Webb’s Near-Infrared Camera (NIRCam) images objects in the near-infrared range from 0.6 to 5 microns, so Neptune does not appear blue to Webb. In fact, the methane gas so strongly absorbs red and infrared light that the planet is quite dark at these near-infrared wavelengths, except where high-altitude clouds are present. Such methane-ice clouds are prominent as bright streaks and spots, which reflect sunlight before it is absorbed by methane gas. Images from other observatories, including the Hubble Space Telescope and the W.M. Keck Observatory, have recorded these rapidly evolving cloud features over the years.”

According to NASA, It is the furthest planet from the sun, and Uranus are called “ice giants” because their interiors are made up of denser substance­­s than Jupiter and Saturn’s gas giants.

Neptune often appears blue in photographs from the Hubble Space Telescope. Still, because the Webb telescope uses infrared technology, which makes it simpler to identify objects in space, it appears more visible.

Since 1989, when the NASA probe Voyager 2 passed by Neptune on its way out of the solar system, no spacecraft has made a stop at the planet. The furthest planet in our solar system is four times as wide as Earth. Astronomers were anxious to learn more about the ice giant, and Voyager 2’s observations whetted their appetites.

Triton is thought to have formerly been an object from the nearby Kuiper belt caught in the planet’s orbit because of its incorrect orbit around it. Astronomers have discovered that ice giant planets like Neptune and Uranus are the most prevalent in the Milky Way as they scour the cosmos for new planets like ours.

In certain photographs, the moon Triton may look like a brilliant blue dot, almost like a star, since it is brighter than Neptune due to its reflective frozen coating of condensed nitrogen.

7 of 14 moons can also be seen in Webb’s photos. The largest moon on the planet, Triton, is the brightest; scientists believe Neptune’s gravity trapped it at an early stage in the solar system’s history. Because methane makes it appear less luminous in infrared photos, Triton’s frozen nitrogen surface makes it sparkle like a star, brighter than Neptune.

This image can learn little about Triton because NASA recently decided against sending a probe to investigate it. Future Webb observations, however, should provide some insight into Triton’s surface composition and may reveal variations that point to geological activity.

The Neptune rings, most noticeable in the telescope’s perspective because of the planet’s orientation to Earth, are visible, encircling it at a slight inclination. Astronomers can measure the ring’s reflectance using the Webb telescope, providing a unique perspective on this far-off spectacle. The dimensions and material of these thin bands, which are most likely formed from ice and other debris, may be revealed by new photos.

The most recent in Webb’s series of solar system photos are those of Neptune. The first views of Mars through the telescope came this week, and the best views of Jupiter came over the summer. The observatory will be able to see far more of our solar system, including Saturn, Uranus, and even distant, cold worlds beyond Neptune, like the dwarf planet Pluto.

Apple Being Forced to Use Type C Chargers By 2024! EU Voted For Single Universal Charger

EU Parliament Voted For Universal Type C Charger! To be Implemented by 2024

Camera which is Battery-Free designed by Engineers